So I’ve dabbled in Kickstarter again, well it’s been a few months since I last backed something on the site and this time it was a small PC that could run Windows 10. 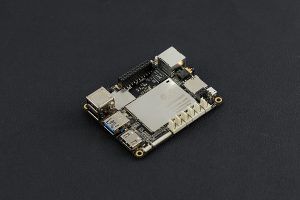 Say hello to the LattePanda. This little board, that is smaller than an iPhone, packs a 1.8GHz Intel Cherry Trail processor and an Arduino chip. It comes in two flavours, the one I backed has 4GB ram and 64GB of eMMC disk space and came pre-loaded with Windows 10.

I backed the slightly more expensive offering on the site which included a 7″ display, acrylic case, psu, usb cable and obviously the board itself. It’s taken a little while to get here running a month or so past the campaigns expected shipping date but it did arrive. 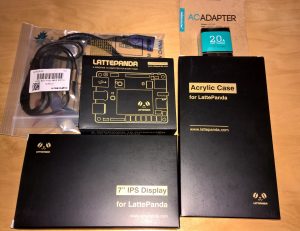 First off, this comes very well packaged – if this packaging was just for the backers on Kickstarter then OK fine, it makes you feel a little special but if this is going to be like this going forward then for production costs you could probably turn it down a little either way they’ve made a damn fine effort.

As a backer I got the choice of plywood case or acrylic case, I chose the latter and when it duly arrived I certainly wasn’t prepared for what I received. This was like some kind of Chinese puzzle, I think there was something like 30+ pieces that all needed assembling. On the campaign page I read how people had broken bits already, no doubt eager to get it assembled so I sat back and took my time – it added to the fun!

Now I’m not going to do a full on review here, people buy this kind of tech for different reasons so I think it’s slightly unfair as this easily fulfills my requirements. I know some people have already done reviews on YouTube some raving and some trashing it, go make your own judgments before you decide to buy.

What I will say is that the CPU does run hot, not over it’s limits but it does cause throttling to kick in but it’s nothing that can’t be sorted with some mini heat-sinks from Amazon. I’m going to invest in some of these as by all accounts they drop the temperatures by ~10c. It should be noted though that the LattePanda team are already working on a cooling solution so it will be interesting to see what they come out with.
So fully assembled, in all it’s glory it looks like this. It’s a neat little unit that could literally be housed anywhere but if you don’t like this and the wooden case doesn’t take your fancy then why not go down the route of others and create your own. 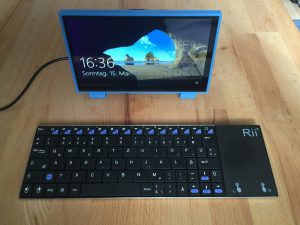 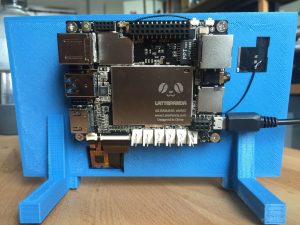 This was done on a 3D printer, not by me I might add, and houses the 7″ screen as well as the touch screen overlay. As you can see the LattePanda is located on the back and fairly open so it won’t get as hot. Personally I think I would have built a bit of an enclosure on the back there, possibly allowing for a small fan to cool the board but I think you’ll agree it looks really smart.

The guys behind LattePanda, in my opinion, have done a really good job here. It would be fair to say that the success of their campaign has probably overwhelmed them a little and caused a few communication and shipping problems but they’re a small team that’s trying hard to change the perception of products from China.

Ooops, nearly forgot to mention this – the LattePanda does seem a little sensitive about its source of power with many users complaining about keeping it alive or even being able to boot up. The beauty of the device is the ability to use a 3rd party supply like an iPad or mobile charger but does seem to need a quality supply and cable.

Prior to mine arriving I did see a post from someone who recommended the AUKEY Quick Charge 3 supply which I subsequently bought and I have to say my LattePanda has been super stable with this!